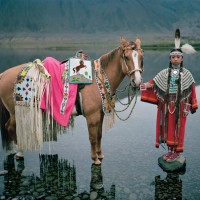 This was in the 2014 March edition of National Geographic Magazine.  The caption reads, “Destiny Buck, of the Wanapum tribe, rides her mare, Daisy, in the yearly Indian princess competition in Pendleton, Oregon. Embraced first for war, hunting, and transport, horses became partners in pageantry and a way to show tribal pride.”

Destiny is a sophmore at Wahluke High School in Mattawa, and this gorgeous picture was taken near the Vernita Bridge along the Columbia River.

In October of 1805, Lewis and Clark spent two days with the Wanapum Tribe.  Here is an excerpt from Clark’s Journal:

“About 200 men Singing and beeting on their drums Stick and keeping time to the musik,they formed a half circle around us and Sung for Some time, “
William Clark, October 16th Wednesday 1805

Chip and I grew up here in Mattawa, and I always like telling people the name of Mattawa is actually a Wanapum Indian word meaning “where is it?”  Living an hour from everywhere, it doesn’t get more truthful than that!

We are proud to announce that our farm is now Global G.A.P certified!
The pride of Washington state!